Meanwhile, West Bronx state Sen. Gustavo Rivera, who has been holding Tuesday evening walks around St. James Park, weighed in at 299 in June and is now at 288. His weekly walks with constituents moves Sept. 1 to 8pm Thursdays at Williamsbridge Oval Park.
Posted by BronxCAN at 9:24 AM 2 comments:

New initiative in the Bronx shows residents they CAN live healthy

“Do you know how many servings of vegetables one needs to consume every day?” asked Marta Garcia, of the Cornell University Cooperative Extension, as she stood before an attentive crowd of Bronx residents of all ages on a recent Saturday afternoon.
The group, which had just moments before chattered loudly, grew quiet.

“Two and a half cups of vegetables should be the daily intake,” said Garcia.
She would know.

Garcia works as a program aide at the Extension’s outreach program, in which the Ivy League university’s College of Human Ecology partners with community-based organizations throughout distinct regions in New York State to offer specific nutrition, health, and resource management programs to help residents solve their problems, and strengthen their communities.

The programs are comprehensive, as they see to reduce the prevalence of childhood obesity and chronic disease through improved nutrition and health practices.

These are not simple tasks in the Bronx, which was ranked the least healthy county in the state by the University of Wisconsin's Population Health Institute and the Robert Wood Johnson Foundation just last year.

Garcia, along with scores of other health related community organizations, were participants in the first Bronx CAN Health Initiative Check-In, which was launched in June with the aid, in part, of New York State Senator Gustavo Rivera.

“There are several factors as to why the Bronx is the unhealthiest county, including less healthy options than other boroughs, but we can take ownership of our personal health habits and behaviors,” said Sen. Rivera.

Sen. Rivera has made a personal commitment to lose 20 lbs. by October 24th, the last day of the Bronx initiative.

At the weigh-in this past Sat., July 16th, Sen. Rivera came in at 293 lbs., down six pounds from his original weight of 299 lbs. in June when the initiative was first launched.

“Holding these events and urging Bronxites to participate in this program is an excellent idea because it is not only helping people to lose weight, but helping people in our community learn healthy habits that will be with them for the rest of their lives,” said Waheebah Shamsid-Deen, a CAN Health Challenge participant. “I have already lost three pounds as part of the challenge but plan to lose more in a healthy way.”

Dr. Myra White, director of the Three Graces Medical Center, did the honors and weighed the Health Challenge participants.

“I decided to eat less and at the same time look closely at the things I ate,” said Agosto, who noted that he had not gained the weight overnight, and that he would not lose it immediately. “Because of this initiative, I am getting on track to having a healthy lifestyle.”

Bronx Health REACH, another participating organization, offered one of the most interesting pieces of information to many of those in attendance: a plate diagram customized for the typical diet of the average Dominican or Puerto Rican Bronx resident. The diagram was a plate divided into four sections. Its point was to show the kinds of dietary recommendations made by the NYC Department of Health: one fourth of your plate should contain protein, another fourth should be made up of starch, and finally one half of your plate should be filled with vegetables.

The surprise for many was finding that the typical Latin dish often contains all of these: proteins (red beans, gandules, and various meats), starch (platanos, yucca, rice) and vegetables (broccoli, carrots, tomatoes). The problem is the disproportionate amount of starches and proteins in lieu of the vegetables.

But even that proved a small problem for the organizers of the initiative.

Veggication, an organization that promotes the “delicious world of vegetables,” provided recipes that can transform even the seemingly lowly Brussels sprouts into a great and tasty snack.

NYC Green Carts also provided two health bucks for every visitor and offered fruits and vegetables so that the participants could start eating healthy right away.

“There is no excuse not to eat healthy anymore; the Bronx has a large amount of support in making the switch,” said Kelly Moltzer, Nutrition Coordinator of The Bronx Health REACH.

The Bronx CAN Health Initiative will continue until October 24th with various events throughout the borough. All Bronx residents interested in learning more about how to adopt healthier diet and exercise habits are encouraged to visit http://www.bronxcan.com or call Sen. Rivera’s District Office at 718.933.2034.
Posted by BronxCAN at 8:18 AM No comments:

Photos From the 2nd Check-In at St. James Park

Posted by BronxCAN at 7:54 AM No comments:


It's National Health Center Week, and Bronx Community Health Network (BCHN) will be hosting a number of events at 10 Bronx locations to commemorate the occasion and raise public awareness about the health services they offer.

On Wednesday, BCHN will offer free breast cancer screenings for women over 40 who have not had a mammogram in the last year. This will take place at the Comprehensive Health Care Center, 305 East 161st St., from 8:30 a.m. to 6 p.m.

The group will also be hosting a number of informational sessions throughout the week at varying locations, on issues like childhood asthma and smoking cessation; a full list of events and topics can be found here.

To find out more about BCHN and its events for the National Health Center Week, contact Renee Whiskey at 718-405-4993, [email protected] or go to www.bchnhealth.org.
Posted by BronxCAN at 8:59 AM No comments:

Building off the success of a similar initiative in 2010, members of the Burnside Avenue commercial district have been celebrating Summer Walk Street Festivals all summer season. They are also intended to serve as the building blocks for the community’s Burnside Avenue Business Improvement District (BID), which has long been a goal of area merchants and business owners.
The mini-Festivals, which run the length of the commercial thoroughfare from Jerome Avenue to Davidson Avenue, are hosted as a way of strengthening communication among local merchants, well as providing area residents with recreational activities that are organized and safe. To this end, there were face paintings, give-aways, games and raffles all throughout the day.
Angel Caballero, Executive Director of the Davidson Community Center, and president of the Burnside Avenue Commercial District, sees the Walks as useful for the merchants’ ultimate success.
“This is an important way for the BID to show its organizational capacity and strength,” explained Caballero.
This past Saturday, July 30th marked the second in the series, and the streets were filled with area merchants, local health care plans and service providers, including the Morris Heights Health Center and Union Community Health Center. There was also a stage upon which local elected officials, including Deputy Borough President Aurelia Greene, New York State Senator Gustavo Rivera and New York City Councilmember Fernando Cabrera honored the efforts of distinguished local community and business leaders, including Caballero himself and Ubaldo Santos, Chairman of the Burnside Avenue Merchants Association.
Mohammed Adbullah, owner of Accra Restaurant on Davidson and Burnside, will be participating in the summer walks and is all for the BID.
“It’s a matter of cooperation by all the business people here,” Adbullah said. “If we can all cooperate, it will be better for everyone.”
What was of far greater, and immediate, importance to many families and children in attendance were the musical and dance presentations offered on stage, which ranged from modern dance troupe to classic salsa.
And the bouncy castle, of course.
“I want to go next,” exclaimed 7 year-old Joshua, as his sister pulled him in to the inflatable house.
All that was heard next was a loud, “Wheeee!”
Misson accomplished.
Posted by BronxCAN at 8:54 AM No comments: 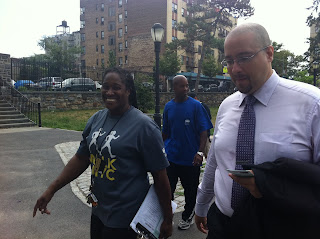 Senator Gustavo Rivera (D,WF-Bronx) launched Walk With Your Senator at St. James Park (2530 Jerome Ave.) as part of the Bronx CAN Health Initiative. This weekly Walk With Your Senator will not only allow constituents another opportunity to discuss concerns in their community with their State Senator, but it will also encourage members of the community to come out an exercise.


The Walk With Your Senator is part of the Bronx CAN Health Initiative, which Senator Rivera launched in conjunction with Bronx Borough President Ruben Diaz Jr. and Bronx community organizations in June. The weekly Walk With Your Senator will be held every Tuesday for the month of August through mid-September. The month of August, the Bronx CAN Health Initiative is focused on promoting exercise and physical fitness. This is walk is also part of New York City's Department of Health WalkNYC events.
Posted by BronxCAN at 8:59 AM No comments:

NY State Senator Gustavo Rivera was on BronxTalk this past Monday night talking about the Kingsbridge Armory, his healthy Bronx initiative, the Jerome Park Reservoir, the vote for gay marriage, and his freshman term in office.  Here's a link to it:  BronxTalk - August 1, 2011

Posted by BronxCAN at 6:53 AM No comments: